Its no secret that a lot of people, including me, factor in “the need for VISA” whenever we choose which country to visit next. Airline tickets to some favourite destinations may be cheap if booked on promo, but still , we think twice , because of the VISA Requirements , which is an added expense and is very taxing to secure, and especially for me, living hours flight away from the capital region where all the foreign embassies are. But fortunately , some particular dream destinations of mine offer Visa on Arrival . India and Nepal were among the top of my list. Back when I was planning my trip India , It was such a relief to know that we Filipinos need not go through the Visa approval process with the Indian Embassy in Manila, since we are granted to enter India via “Tourist VISA on ARRIVAL” on certain International airports. Kolkata included, which is probably the cheapest flight route option to enter India, with Airasia Promo. Other countries are Finland, Japan, Luxembourg, New Zealand, Singapore, Cambodia, Vietnam, Laos, Indonesia and Myanmar. (as of 2011) . From April 15, 2014 it was extended to include South Korea ( GOINDIA.ABOUT.COM) . The visas are issued at Delhi, Mumbai, Chennai, Kolkata ; and from August 15, 2013, Kochi, Trivandrum, Hyderabad and Bangalore.Maximum validity of a tourist VOA is 30 days. A VOA is strictly for tourism purposes and is not applicable for other types of visa. What I brought with me :

UPDATE :  As of January 2015, securing Visa on Arrival to India now requires online application , for at least 4 days prior to travel . Documentary requirements given above are still applicable. Check out  this link to start the application process .  https://indianvisaonline.gov.in/visa/tvoa.html 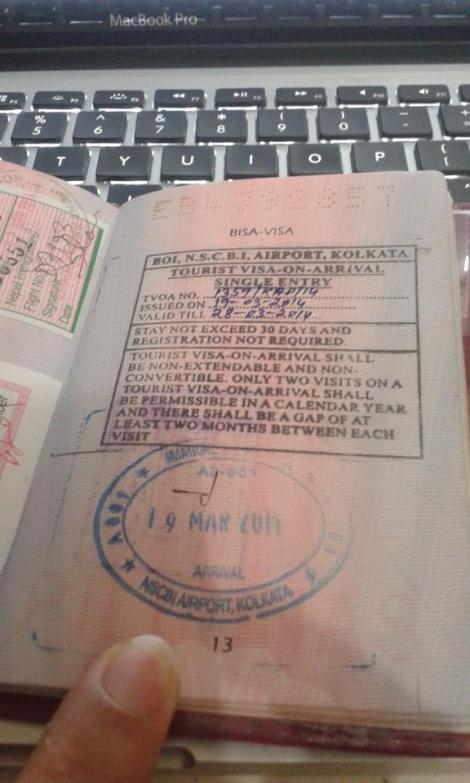 my tourist VOA Stamp. If you get your visa at the Embassy in your city, you will probably get the Sticker Version of the Visa

Arrived at around 12 MN in Kolkata, and it took me an hour to wait at the immigration office for the TVOA . The indian officers that time were quite relaxed, there were only two of us getting the TVOA. The other two were indonesians. Of all the documents I brought, they only took One picture, the payment, and photocopied my passport ( they did not accept the Photocopies I brought with me).  I just filled up the form they provided, and they did not even bother to check my e ticket, hotel booking , and funds documents etc.  The officers were probably tired at that hour.  But still, I recommend you bring all those documents, just in case. KEEP the  3,600 INR VISA Receipt! Getting the TVOA in Kolkata was surprisingly easy for me. It was even more difficult to get through Philippine Immigration at some point.  The Immigration officers we have are sometimes OA . 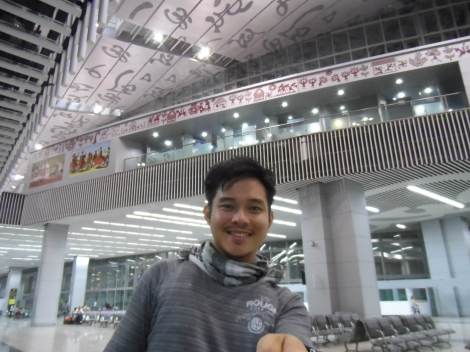 Getting out of the Airport to Kolkata City Center, Since I arrived pass midnight, I opt to spend the night at the airport, which was recommended by some forums. It would be difficult to commute at that hour, and doing that also saved my One night hotel expense. So I just had find a corner in that huge, super cold airport, spread my jacket and lay on the floor. There were not much people sleeping at the airport, as compared to my SG or KL  experience. Netaji Subhash Chandra Bose International Airport ( Kolkata Airport ) is modern and relatively new, the terminal two where we landed started operating 2012. It was nice and all, but the Toilet bowl was , uhm…. skidmarked ! which was a welcoming sight for me in India. This sight occured many times in almost all cities Ive been. hahaha. But carry lang =) around 6 am , I checked on the exit to find the local bus. but apparently,  Buses start at 8 am… So I opt to get an airport taxi instead for 150 INR (2.5 USD) to take me to the nearest train station, which was DumDum Metro Train , around 10-15 minutes crazy overspeeding ride crossing highways and cows and goats are everywhere lounging at the middle of the road. My First taste of Indian RUSH ! haha At Dumdum , It was also tricky to find the right METRO STATION to the City , as this train station is interconnected to the rest of the provinces. Do not go up the first train station building, as this is the inter city railway routes.  Ask the locals to lead you to the METRO STATION , which is just a few walks away . From there, I had my first Non Air , Full packed , Indian Train Ride to the City center. And my Indian backpacking experience went on …. =)

This is the upper deck of dumdum station, which holds the inter city routes. Dont ride here… go down the stairs , to the metro station below 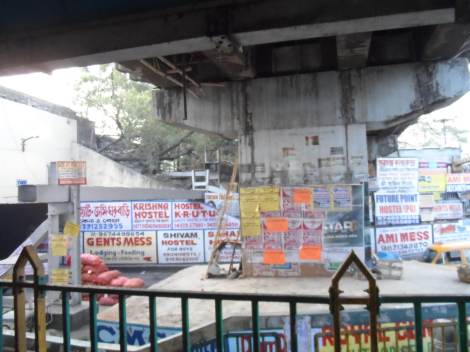 typical view at kolkata. taxi will probably drop you at this place near under the railway. 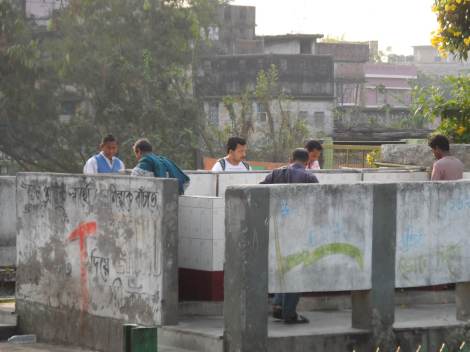