From Vigan, I headed further up north to Laoag and lazily roamed around the city and nearby towns for 2 days. Laoag is 2 hours away from Vigan, and around 9 to 10 hours away from Metro Manila , both by public bus. There are comfortable buses  that travel by night from Manila to Laoag , as well as the other way around , which I think is fairly ideal to do for budget conscious travelers, because it saves you a night stay at the hotel. Farinas Bus and Partas Bus leaves pasay on a scheduled trip.

I will be uploading a separate detailed post on recommended Ilocos backpacking budget , but for now , here are some of the highlights and the must do’s, inspired by my recent visit to Ilocos Norte: 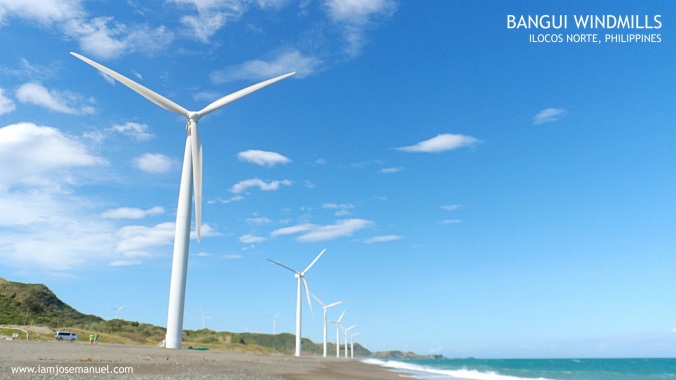 Visit Bangui Windmills in the Morning . The Windmill complex is an iconic landmark of Ilocos province’s progressive state . Bangui is around an hour bus from Laoag City .

Bangui Wind Farm is a wind farm in Bangui, Ilocos Norte. You probably saw this on several Philippine tourism Ads , such as the “Biyahe Tayo” of Regine Velasquez from few years back. With 20 units wind turbines of 70-metre high, Bangui windmills Asia’s largest wind farm today, making Bangui the capital of green energy in the Philippines

Head further up north and spend lazy afternoon at Pagudpud Beach . This is another hour away from Bangui by bus + tricycle.

Calm and Clear shores of Pagudpud

The white sand shore of Pagudpud is comparably as wide as Boracay. Not as fine though , but still very beautiful in such as way that its calm, and fairly unconsumed by resorts and commerce.

Fellow Backpackers I met while travelling Ilocos Norte. Shout out to Vincent and the guys. Hola ! =)

Cape Bojeador Lighthouse . Along the way back to Laoag from Pagudpud by bus, drop by this charming lighthouse up the hills of Burgos , overlooking the mighty South China Sea.  A lot of Filipino movies have been shot in this enchanting location.

The Mighty waves of South China Sea, crushing though the time formed cliffs of the North.

Lazy around the grounds and gardens of the Majestic Paoay Church , Preferably late afternoon, or ’til sun down, if you wish; Paoay is just 30-45 minutes away from  Laoag by public jeepney. A Unesco World Heritage Site, this is probably the most photogenic church I have ever visited. It is also where the Filipino/ Thai movie “Suddenly Its Magic” was shot .

From Paoay, it is also just one tricycle ride away to the Malacanang of the North, a Pride of the Marcos Regime .

Ilocano Pakbet at 95 pesos per meal . Food is fairly affordable in Ilocos , even at restaurant that are a bit fancy and with a great view =)

They call it Poki Poki , an ilocano delicacy … which is a battered- deep tried talong (eggplant) Rufino’s however turned theirs into bite sized balls. 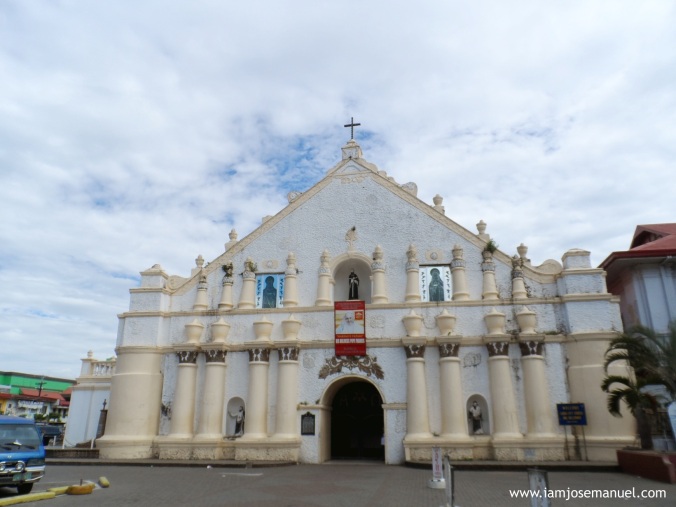 Sweet Buco Roll, hot and fresh from the oven . This one is really yummy and has recently became a popular item for pasalubong , as per some locals. This Buco Roll Bakery is just at the front of Farinas Bus terminal, and is open 24 hours

Sample some yummy Batac Longanisa ( Ilocos Norte’s own ) This Longganisa is a bit milder in taste an smell, compared to Pampanga’s and the usual other Filipino Longganisas.

Visit Ilocos Museum and Check out Food stalls and cafes at the compound of the Museum. 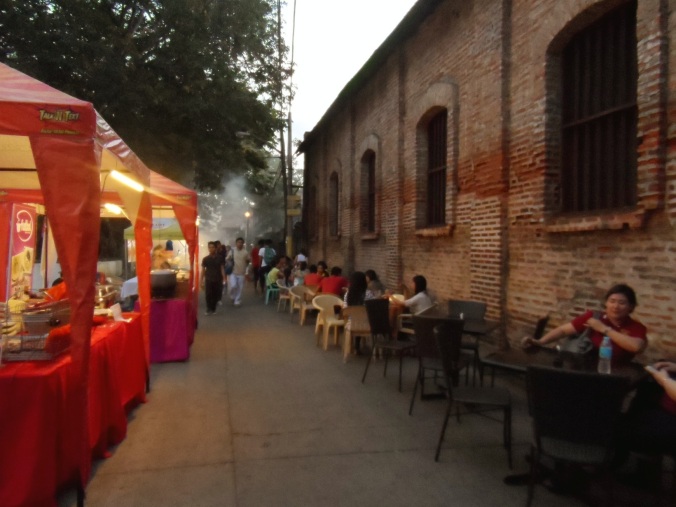 Johnny’s Pasta with generous seafood toppings , from Johnny Moon’s Cafe . which is as well at the compound of Ilocos Museum

Johnny Moon Cafe , serves Laoag’s contemporary twist on ilocano dishes. The name is keenly thought and derived from one of Philippines’ National Heroes, Juan Luna , who is also from the province of Ilocos Norte 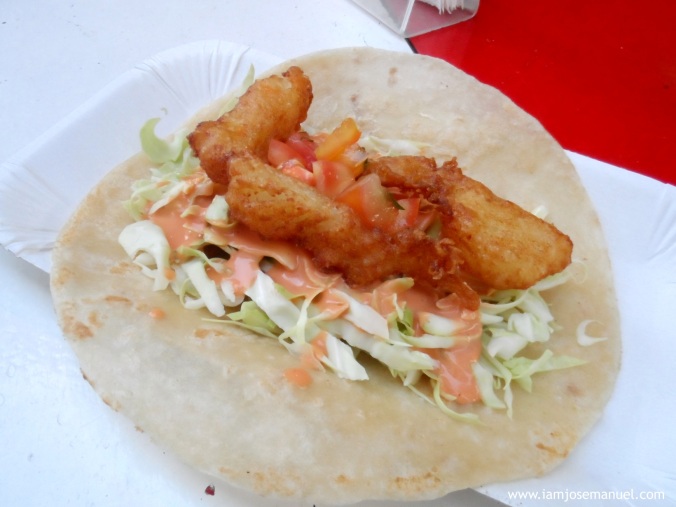 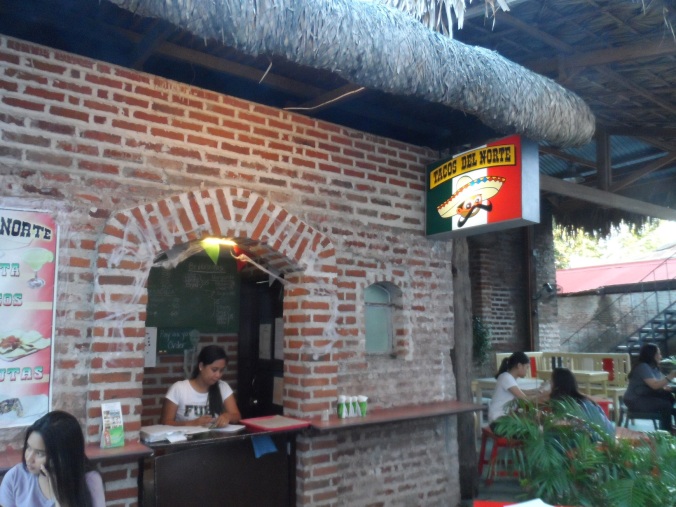 Where I Stayed : Texicano Hotel along Rizal Street, just stone throws away from Farinas bus Terminal.  Rooms start at 350 pesos , Ideal for backpackers.  Will upload a separate article for suggested cost, stay tuned =) 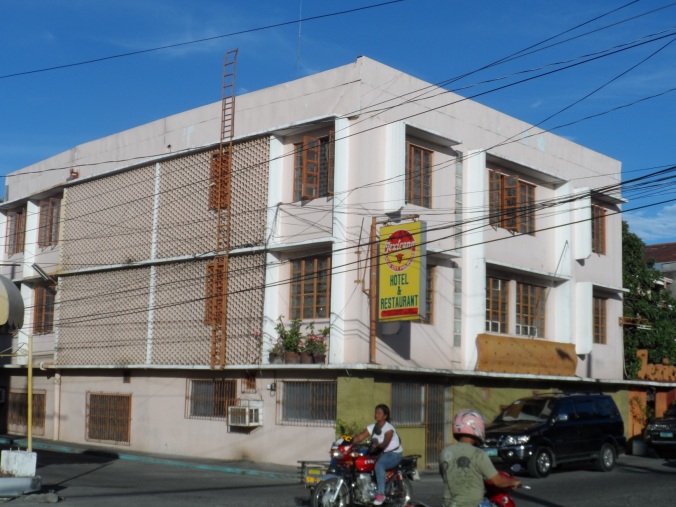