It was Spring when I visited Nepal , which was between March/April when the wind from the Himalayas gently cool Kathmandu valley and the rest of the mountainous country. Temperature is soothing at around 18 degrees C during daytime. Locals say it was the perfect time to visit the country , as it sometimes get uncomfortably warm in summer , and too cold during winter. ( Although it doesn’t snow in Kathmandu Valley ).

For those with limited time in Nepal , here are the recommended Visits to world heritage sites that should never be missed. These recommended places are just within Kathmandu, thus, visiting these four places can be fit in a day.

Allot some budget for Taxi or rickshaws , since the buses within Kathmandu City can be quite in chaos.  ( However, buses going to other cities are OK )

Visit Swayambounath Temple on early Morning to observe buddhist prayers – Swayambounath ( The Monkey Temple , also known as Harati Devi Temple )  is a Buddhist Temple that sits on top of a hill ,with an overlooking view of Kathmandu City.    It is ideal to visit Swayambounath temple early  in the morning  around 6 am to observe and even participate with buddhist locals chanting personal prayers while circumambulating around the stupa.

Swayambounath is just 15-20 minute taxi ride from Thamel , for 100 – 200 NPR ( 2 usd ) . Some tourist just walk it up from Thamel , for maybe around 30-45 minutes.  Meanwhile, me and a friend hopped on a rickshaw for 100 NPR, thinking that taxis would be to expensive. But apparently, rickshaws cannot go up the rolling terrain on the way to the temple , as such, we were just dropped off somewhere near and had to walk up for another 15 minutes. But it was a leisure walk as you get to pass by houses and a local school. =)

Me and Karen riding an overpriced Rickshaw around Thamel.

Always keep an eye on your pouch as there are a lot of monkeys on the way up this hill, eager to grab any loose thing you carry. lol

Up the hill of Swayambounath Temple (Monkey Temple )

A View of Swayambounath, the monkey temple on top of a Hill over looking Kathmandu City 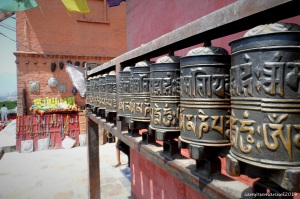 Kathmandu Durbar Square , the City palace complex , and biggest in Nepal, although a bit crowded.  Entry Fee is at 750 NPR ( 7 usd ) for foreigners, although there are a few unguarded streets which can lead you in the complex for free. =)

Taxi from Swayambounath to the Durbar square costs around 200 NPR . 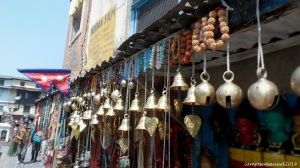 Some shops around the Durbar Square . Chimes and Bells are usual sight on streets of nepal 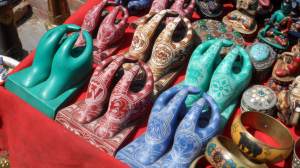 hand carved wood items . On this Photo are some quaint Card holders 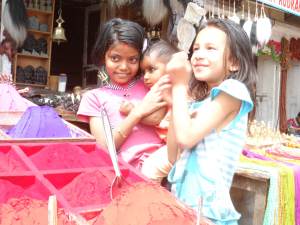 Random Kids on the street

Pashupatinath Temple should not be missed . But do note that this place is not for the faint hearted. Pashupatinath is a Hindu Temple where Traditional Public Cremations are done. The temple stands on a  river bank where the dead is cremated , and the ashes hurled onto the water. The river, known to locals as the Bagmati, flows down and onto the holy Ganges river of India , where this Hindu Tradition originates.

Visit Pashupatinath Temple with an open mind, as you will definitely see cadavers here and smell burning flesh.

Entry fee = 1000 NPR at the main gate  ( or you can pass by another remote entrance on top of the hill, near the open park to get in for free)

Taxi from Durbar square to the Pashupatinath costs around 200 – 300 NPR .

Some men dressed as Sikhs . 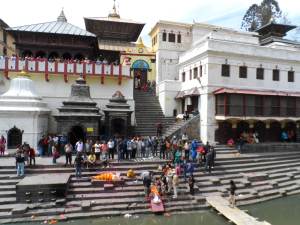 Public cremation of the dead , a tradition done by Hindus , held at Pashupatinath Temple 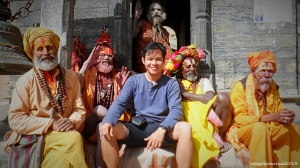 Photo selfie with the Sadhu , or the holy men of Hindu, in Pashupatinath Temple, Kathmandu . Photo taken by Sherald Aldaba

From Pashupatinath Temple , It is fairly walkable to another World Heritage Site , the Boudhanath Stupa , which will take you around 30-40 minutes.  ( Get a direction from google map ) . Nonetheless , it will be a leisurely walk around downtown Kathmandu , and you will also pass by some commercial districts. Try some local snacks along the way. =)  Ideally, you will reach Boudhanath Stupa around 4 pm.

cows eating grass. landscaping is not ideal in India and Nepal. hehe 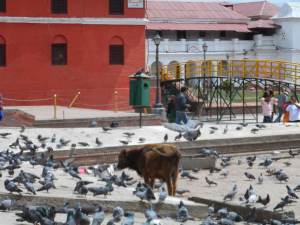 Boudhanath Stupa  , The national Symbol of Nepal , which is also one of the biggest Stupa in the world.   Around the Stupa, is a very charming , well manicured commercial district  of Kathmandu.  Stop by at a rooftop cafe and enjoy the view of Kathmandu as the sky turns indigo . 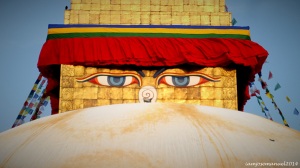 Eye of the Boudhanath Stuppa 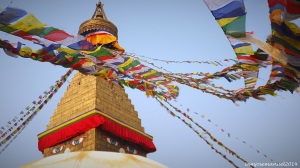 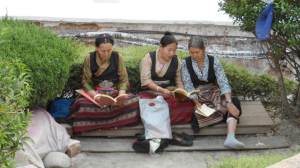 A tourist finding her nice corner at Boudanath Stupa

Downtown Kathmandu . the nice side of the city surrounding boudanath stuppa

One thought on “Getting Around Kathmandu in a Day”