One of the highlights during my visit to Italy was an unplanned day trip to Cinque Terre.

Cinque Terre (the five lands in Italian) is the collective name for the five charming fishing villages seated between the narrow coastal strip and the mountain chains of Western Italy. These five old style villages along the Mediterranean coast are also declared as one of Italy’s Unesco Heritage Sites.

A picturesque view of Maranola, one of the five villages I’ve visited, clearly represents the Cinque Terre coastal settlement feels.

I had a day to spare that time in Florence, so I opted to join a shared tour to see this popular cluster of villages in the Liguria province, which was 2.5 hours away by bus. The shared tour cost me 75 Euros. DIY options to see Cinque Terre have been mentioned by some blogs, but doing so was impossible for me since I had limited time and getting there from Florence was a bit complicated. A bit pricey (actually the priciest ‘one day spend’ I had), but still, spending on such experience was a worthy choice, as the drive from Florence, crossing the Tuscan countryside, and towards the Italian Riviera (coastline) was indeed picturesque in every way.

I booked the shared tour though Hotel Paola, where I stayed in Florence. Tour lasted 7 am to 6 pm.

Manarola is the calmest of the five villages, and is a bit more rustic and less polished than its northern neighbors. This was our first stop for the day trip. If desired, packaged trekking tours often starts here, with Via della Amore (The Lovers Path), which is a very scenic and easy path that leads the next village Riomaggiore.

Tourists can also go swimming here in a little cove on the coast, as shown in the picture. 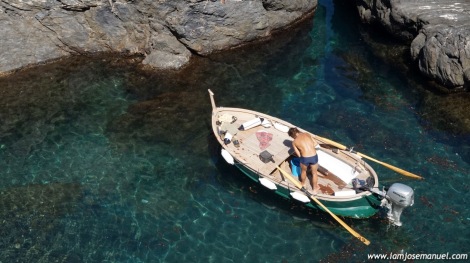 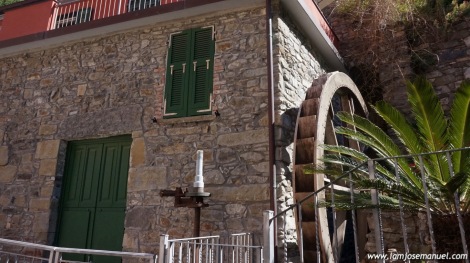 Cinque Terre is part of the Italian coastal province of Liguria, and Pesto is one of the famous contributions. As such, tourists can find pesto topped on almost all local dishes. This pesto pizza slice was a bomb!

Vernazza is probably the most charming of the Cinque Terre villages, as it’s right on the water and there’s a lovely church tower built in 1318, on a rock right in front of the sea. The ruins of a castle are on one of the hills overlooking Vernazza. This is the village that tends to be most visited by people carrying Rick Steves’ guidebooks.(Lonely Planet.com) 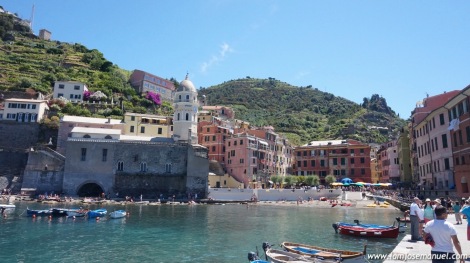 Monterosso is the largest,most modern and resort like of the five, and the most visited, especially by the young crowd. It’s the only village of the cluster with a nice long span of beach. 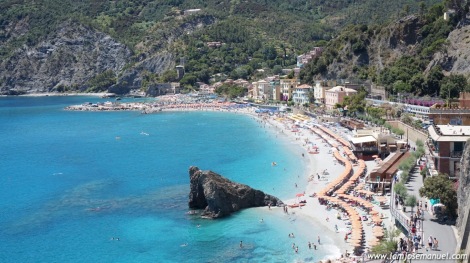 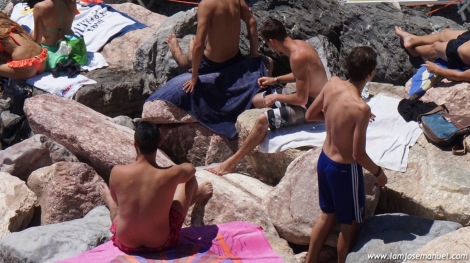 In the 16th century, Monterosso defended itself from vikings by erecting 13 towers, of which only three remain today.(Lonely Planet.com) One of these remaining buildings, the Aurora Tower, is definitely a must see. The tower offers a great view of the Ligurian Coast and the Mediterranean sea.

There are also quite a few unique churches to explore like the Abbey and Church of San Francesco, which was once transformed into a hospital, and then into a warehouse in the 1800s. But  in 1894 it was restored, and now houses important art like The Crucifiction (attributed to the painter Van Dyck).  (Lonely Planet.com) 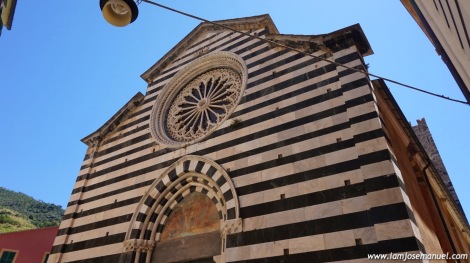 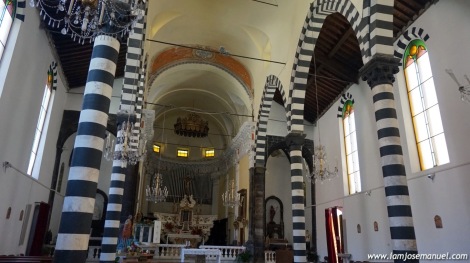 Monterosso is also famous for producing the highest quality Limoncino citrus wine. Local shops are generous to share free tastes of wine, as well as home made pesto.

Riomaggiore, slightly different from its neighbours, is relatively large and spreads inland towards higher grounds. Local vineyards, and tomato gardens line up the paths of this village. 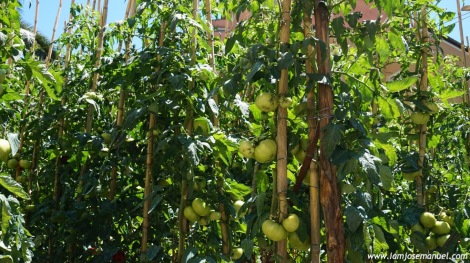 Here you will find cool bars and pubs sitting on top of the cliff. A beer here would cost you 7 Euro per bottle.

Among the five villages of Cinque Terre, the tour only included four, since we got short of time to see Corniglia.

Getting to Cinque Terre can be quite tough when plotting a day trip on your own by train, as the trains to La Spezia, which is the gateway to Cinque Terre, has limited daily schedule. From La Spezia, another train transfer is required to take you to Maranola, which is another hour and a half away. When planning a DIY trip, I would recommend staying a night or two in any village of Cinque Terre, with train tickets booked ahead of time. If I only had longer time to spare in Italy, I would have had it that way. A Day trip to these charming UNESCO protected villages definitely isn’t enough.

Revisiting is definitely on my thoughts. And perhaps that time, I’ll have along with me someone special, to share a bottle of Limoncino, while waiting for sunset. That would be sweet. =)

One response to “A Charming Day Trip to the Italian Coast: Cinque Terre, Italy”