The country of Laos, officially referred as Lao People’s Democratic Republic, is a landlocked country in Southeast Asia, bordered by Vietnam to the east, Burma and China to the northwest, Cambodia to the south, and Thailand to the west, as divided by the Mekong River. As a landlocked nation, Laos greatly depends commerce and trade with its neighbouring giants.

Laos is among the few nations today that run on communist rule, to which has only opened its doors to global trade and tourism during the 1990’s . As compared to its neighbours, Laos is less dynamic and is still on the process of coping with the demands of modernity ; we at least for the moment.

Pra That Luang Shrine, the most respected Religious Symbol of Laos

Vientiance City, the capital and the biggest city in Laos 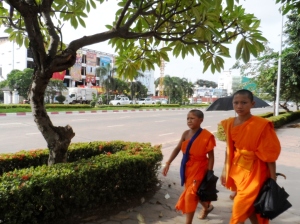 Vientiane is the capital city of Laos . Though the nation’s the biggest, this city is less modernized, with no railways  and no malls , less noise and traffic , with a lot of patches of green.  The central market is still the city’s source of almost everything.

I arrived to this laid back city on a Sunday afternoon, and I was eased to see that locals enjoying the parks and open spaces, and playing a sepak takraw like game. A number of tourists freely enjoy roaming the streets on bike . Vientiane was definitely a breathe of relaxing atmosphere. 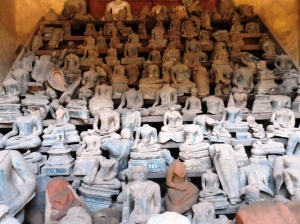 Palace of the President

Laos is not much visited by Filipinos as compared to other ASEAN nations. In my five days stay, I have not heard of a single Tagalog phrase , I was a few times asked if I were Thai or Chinese. I definitely felt the foreign atmosphere in this Country.

night market at the riverfront promenade 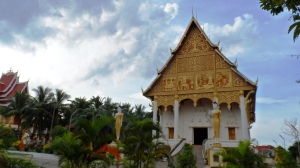 The biggest Buddhist Temple in Vientiane

A view of the stuppas

Local juice along the streets. Similar to Thai .

I Explored the nearby night market for local food. They do a lot of grilling and sun drying . This red meat on a ring is like dehydrated seasoned pork , covered with sesame seeds.

I personally think that Lao food is influenced by Chinese , less the flair and artful preparation, since Laos is farther up the mountainous side of Indochina Peninsula.

Chinese food and lifestyle definitely made an influence neighbouring countries in Southeast Asia. But with the route I travelled, I have observed that the farther the country is from China, the simpler the food becomes. 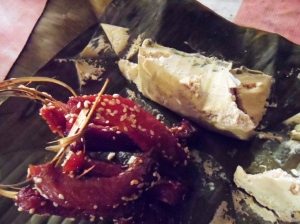 Air dried – seasoned pork up close. yummy ! This is their version of Chinese Asado.

grilled frog. More than just a delicacy, frog is considered a staple food in Laos. Probably because the country is landlocked and seafood supplies are imported from Thailand and Vietnam. 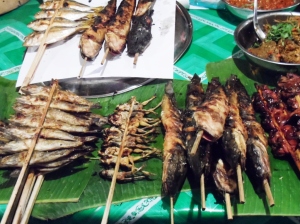 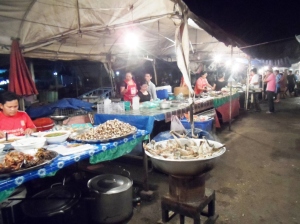 Egg crepe ,which can be found everywhere in Laos.

One fine morning in Vientiane , I woke up at 5:30 am to check out the nearby Talao Sat Public Market , which is the city’s center for trade .

It is always a priority of mine to visit public markets whenever I go places, because it is where one finds cheaper souvenirs, and authentic cooking. But more to that, public markets are less trendy and more on the local atmosphere, which gives visitors an interesting vibe on how the foreign community starts up its day.

First time to see this much Boiled Whole Chicken. This is done to prevent meat spoilage. I have also noticed that sellers here don’t use ice . 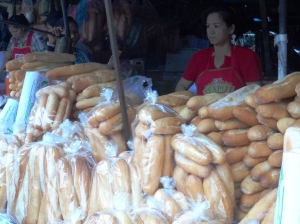 French Baguette. Strong french influence since Laos has been under France for quite a while.

Steamed rice prepared on a basket. very different from the way Filipinos do it.

From a local eatery. Bamboo Soup + grilled pork and rice

Bamboo soup ( Kong No Mai Sai Yanang ) Delicious ! similar to our pinoy Lau-uy due to its texture

One thought on “Laid Back Charm of Vientiane, Laos”